The Night Cat 40 introduces an innovative approach to reduce the shock forces experienced by (SOF) and provides a fully capable vessel to defend the United States, its interests, and to synchronize planning of global operations against terrorist networks. This new platform reduces the fatigue and physical damage crewman and combat forces suffer that ultimately severely impact their ability to conduct missions. Maintaining a highly maneuverable and stable craft, we incorporate signature reduction and the ability to be reconfigurable on short notice to accomplish any mission related to the SOF core tasks. 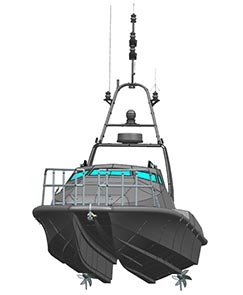